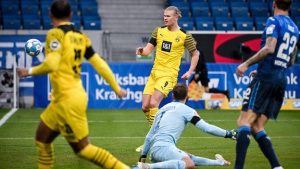 to move to within three points of Bundesliga leaders Bayern Munich.

for his 16th goal of the season, though he was forced off in the second half with an apparent groin injury and was replaced

Former Leicester striker Kramaric brought the home side level with a spectacular volley just before half-time,

but Malen teed up Reus to restore Dortmund’s lead shortly before the hour.

Malen then made it a hat-trick of assists when his cutback was turned in to his own net by Raum to make it 3-1.

but they could not find the equaliser.